It's been said that "software is eating the world", yet software development teams waste time and money because they struggle to communicate software architecture. Existing CASE/modelling tools are complex and have become unfashionable after the "agile" movement started in 2001. Teams now tend to favour whiteboards and general purpose tooling instead. The resulting diagrams, however, are typically ad hoc and confusing, which slows communication and learning. The diagrams are also disconnected from the code, which limits their usefulness for architectural improvement.

Software architecture diagrams are a great way to explain and document how a software system works. Static diagrams, whether drawn on a whiteboard or with a general purpose diagramming tool such as Microsoft Visio, tend to get out of date quickly and often don't reflect the real structure of the code. On the other hand, automatically generated diagrams, such as UML class diagrams created by reverse-engineering the code, typically show far too much detail, limiting their usefulness.


This is a recording of the "Visualise, document and explore your software architecture" presentation from the OpenSlava conference in Bratislava, Slovakia during October 2017 (35 minutes). In this talk, Simon Brown (Structurizr's founder) discusses the problems with typical software architecture diagrams, and introduces the C4 model.

Have you abandoned UML and switched back to ad hoc "boxes and lines"?

Do your software architecture diagrams never match the code?

Do your software architecture diagrams get out of date quickly?

Do you feel overwhelmed by automatically generated diagrams?

The goal of Structurizr is to allow software developers to easily create software architecture diagrams that reflect the code. Here's how Structurizr compares to other tools. 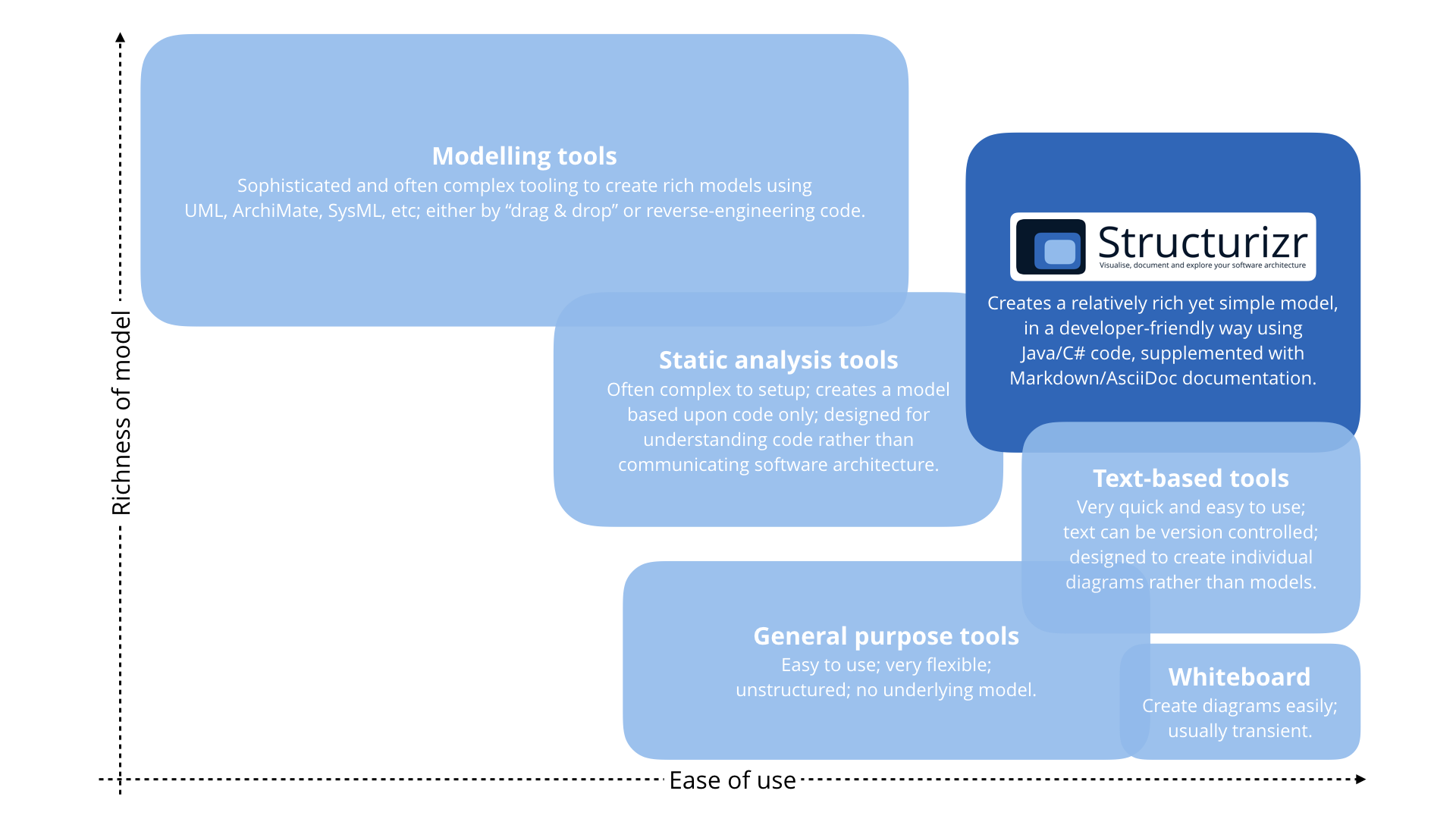 Sketching out software architecture diagrams on a whiteboard is probably the starting point for many of us. Although it's quick to get started, the resulting diagrams are often erased because somebody else needs to use the whiteboard. Taking a photo of the whiteboard allows you to at least capture the sketches, but that resulting photo isn't something you can update easily.

Whiteboards are a great tool for sketching out ideas, but the result is a collection of transient, static diagrams. 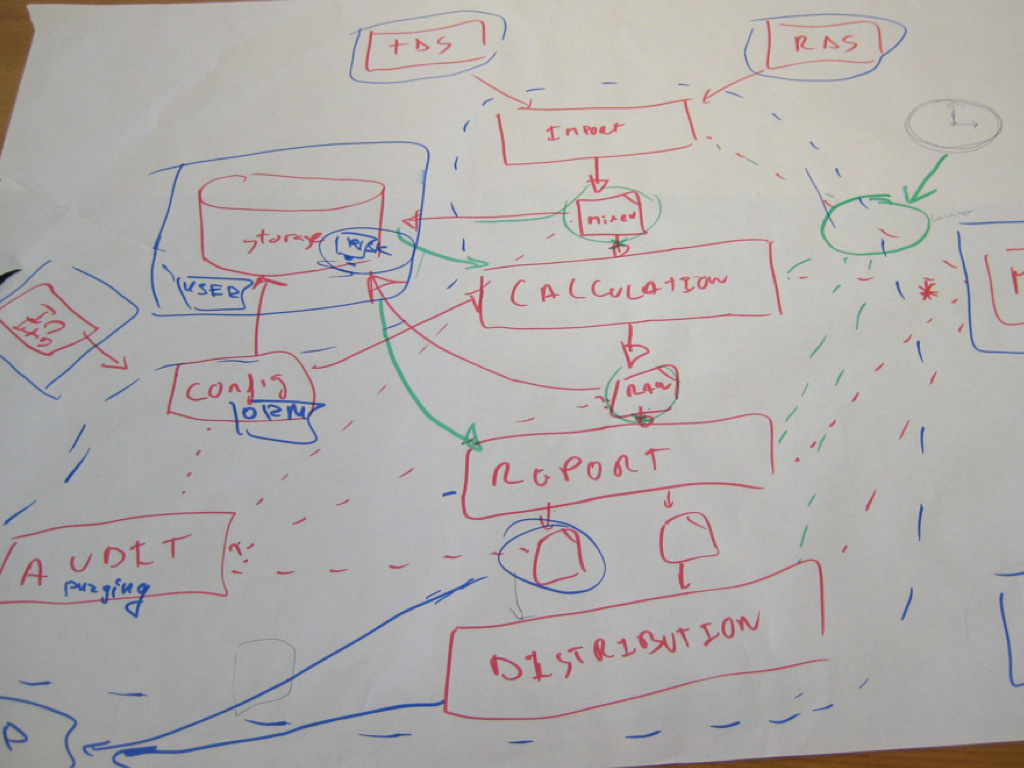 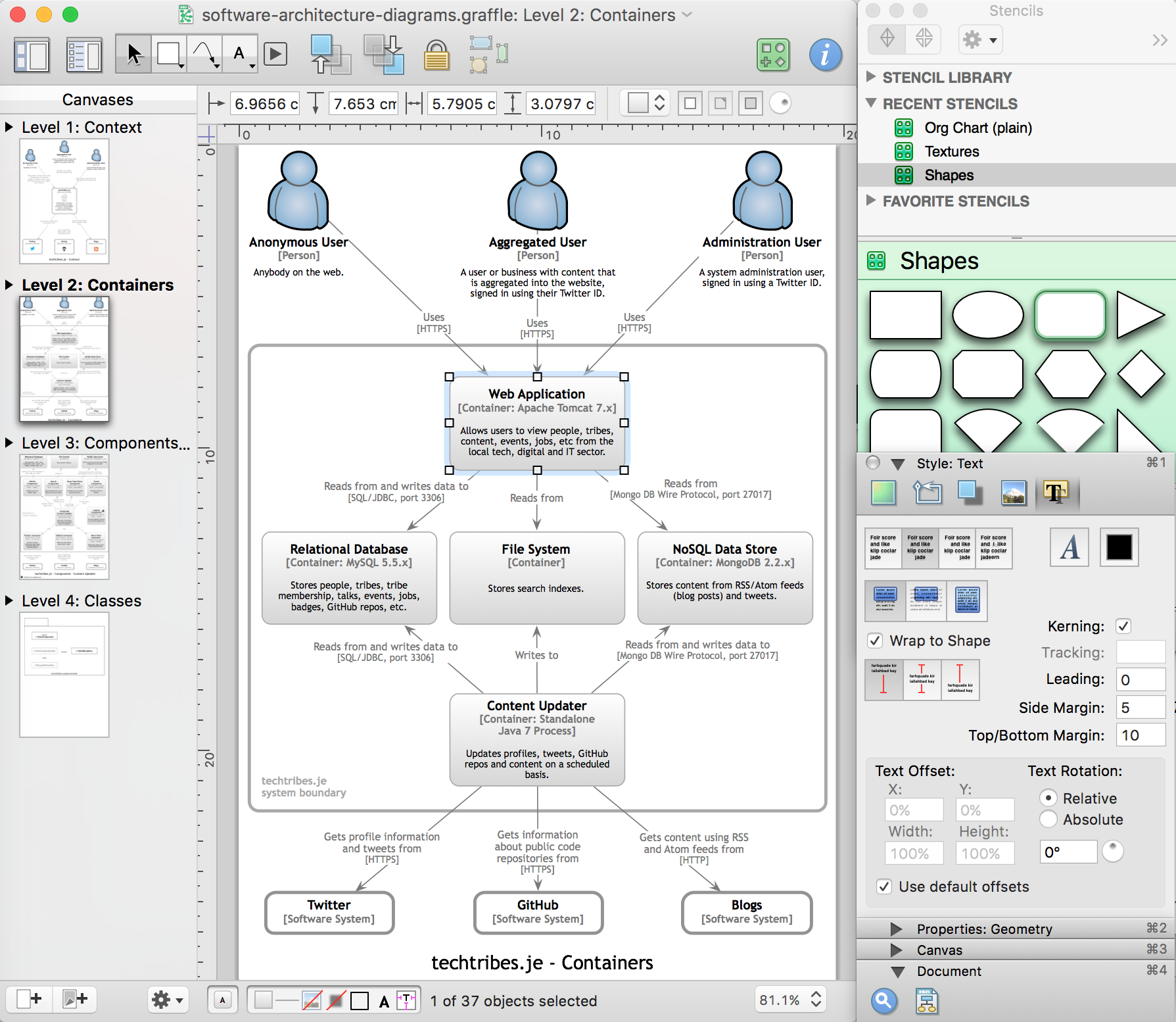 The trade-off here is that unless you're using a pre-built template, you're effectively starting with a blank canvas. In order to create a software architecture diagram, you need to figure out what notation you'd like to use, create boxes on the diagram canvas, resize them, add text as appropriate, set the font size and text alignment, link boxes together with lines, specify which end of the line should be an arrowhead, add text to the lines, etc. There are some exceptions, but generally each diagram is exactly that, a static diagram rather than a view onto a single model. This means changes to the name of a box or an element style on one diagram will not automatically propagate to other diagrams.

General purpose diagramming tools give you a lot of power, but the responsibility to keep the resulting diagrams consistent and up to date is yours.

This category of tools allows you to perform static analysis of your codebase. Popular examples include Structure101, Lattix, NDepend, Sonargraph, JDepend, JArchitect, etc. The primary focus of these tools is to let you explore and refactor the structure of you code, typically using rich visualisations that depict the structure of your code. Although these diagrams help you explore your code, they're not really "software architecture diagrams". Many of the static analysis tools are expensive and difficult to use, which doesn't make them as popular as they perhaps should be. 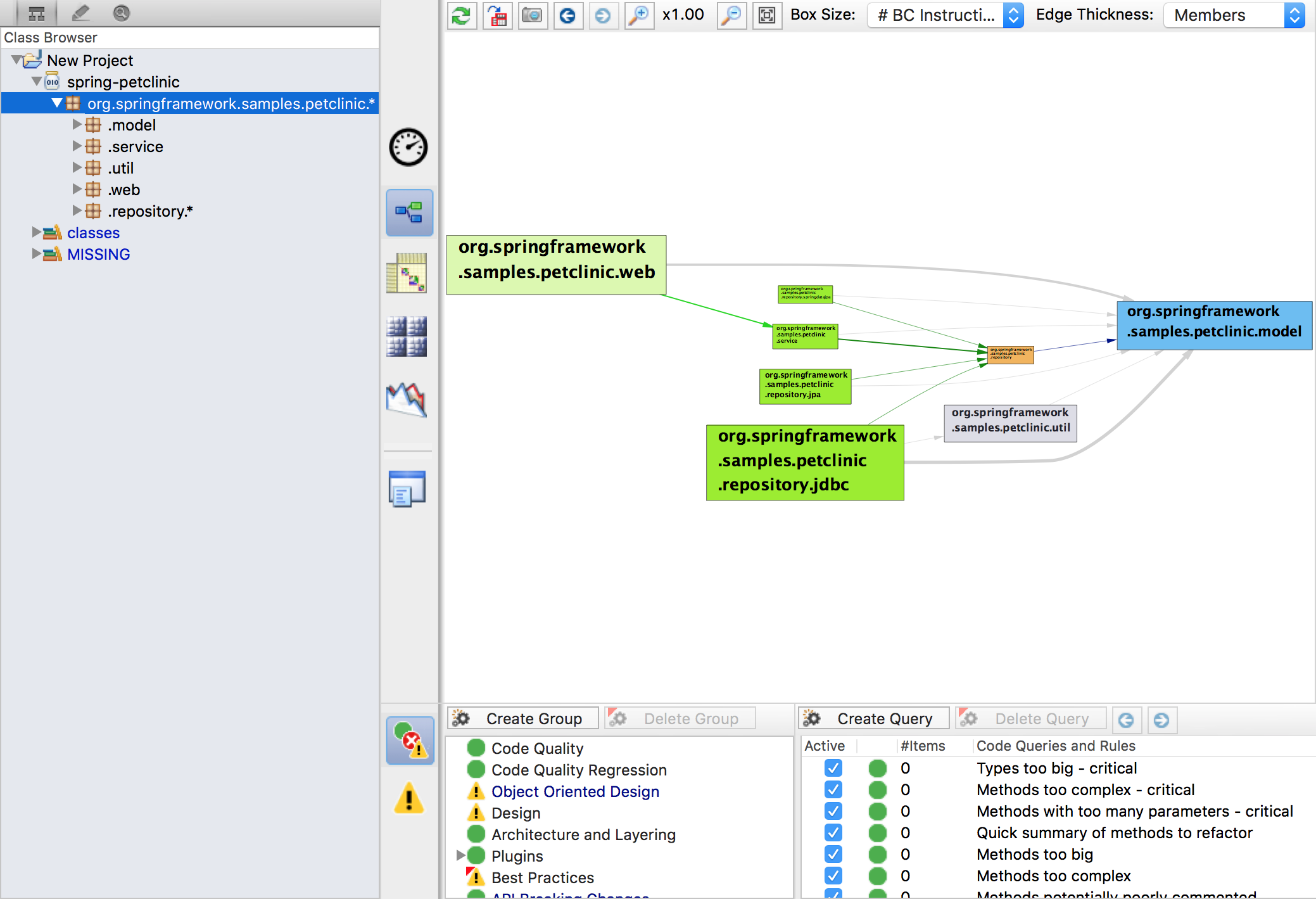 Static analysis tools are very powerful for exploring a codebase, but they don't really generate diagrams that are useful for explaining how a software system works at multiple levels of abstraction, such as those you might want to use in a presentation or documentation.

There are many modelling tools available, both free and commercial, that support a number of different modelling languages and notations such as UML, ArchiMate, SysML, etc. Popular examples include Enterprise Architect, MagicDraw, Rational Software Architect, Visual Paradigm, Archi, ArgoUML, etc. There are also modelling plugins for many IDEs. The purpose of a modelling tool is to let you build a rich model of your software system, which you can subsequently visualise using a number of different views. 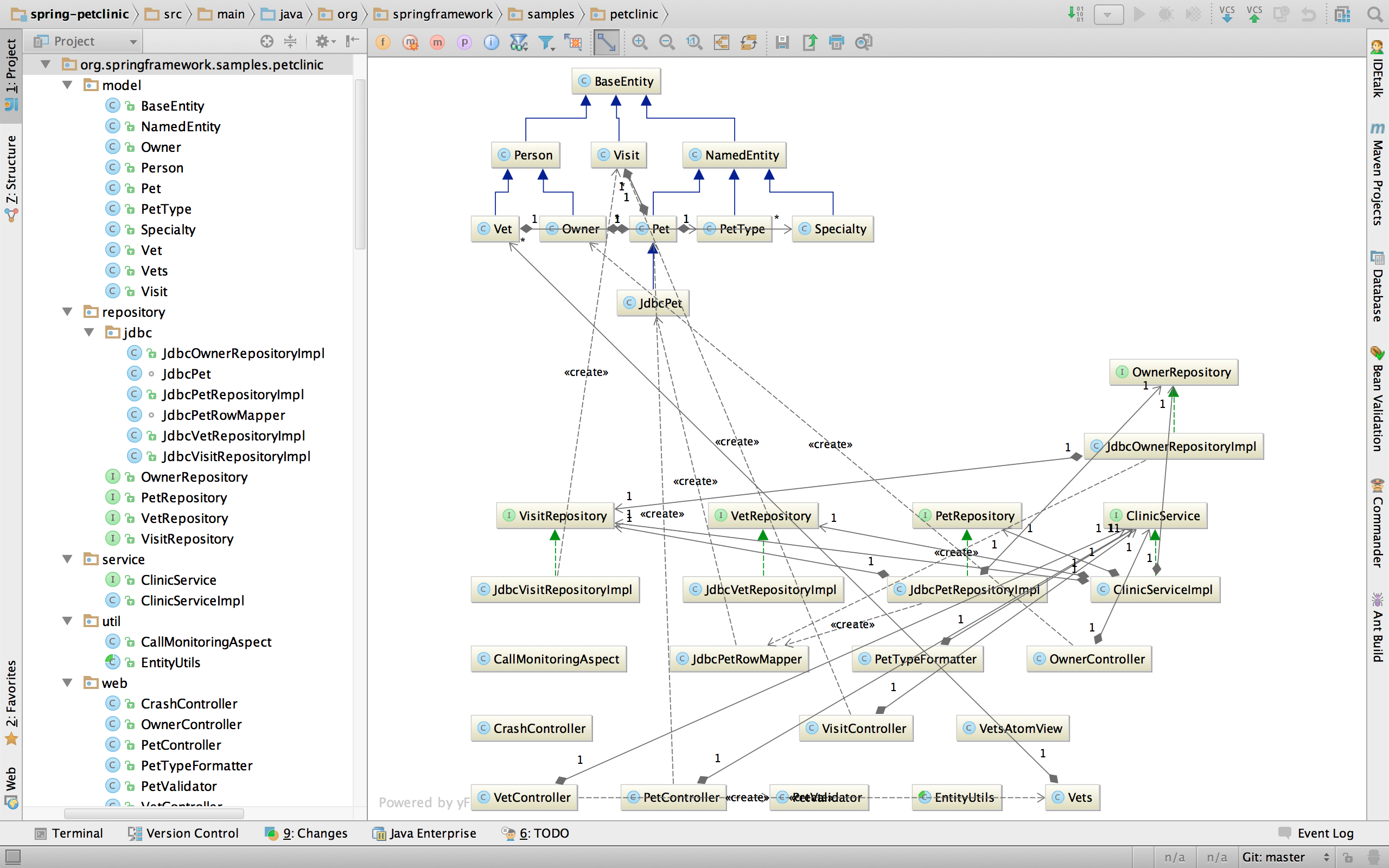 The power of a model is that it provides consistent naming of elements between diagrams, as well as introducing a set of rules to describe elements and their relationships. The downside of many traditional modelling tools is that it takes some effort to create the model and keep it up to date, plus such tools can sometimes seem overly restrictive or heavyweight if you simply want a quick diagram. Although some modelling tools will let you reverse-engineer a model from code, the resulting model is usually very detailed. If you point a modelling tool at a Java codebase, that modelling tool will see the basic constructs that you use to build your software; namely interfaces, classes and packages. Unless you provide some rules, reverse-engineering tools will see classes rather than components.

Tooling aside, there's still the question of notation, and specifically UML. UML provides a standard set of abstractions with which to think about and describe a software system, along with a standard set of boxes and lines (the notation) to represent those abstractions. Anecdotal evidence suggests that UML usage is on the decline, with notational complexity and a lack of UML knowledge commonly being cited by teams that no longer use it.

Modelling tools are also very powerful but it can take a lot of effort to keep the models up to date, and reverse-engineering a model from code often produces results that are too detailed.

There has been a trend towards the use of simple, single-purpose, text-based tools in recent years, that provide a way to convert a textual representation of something into a diagram. Examples include PlantUML, nomnoml, yUML, WebSequenceDiagrams, Graphviz, etc. These tools are very easy to use and the source text can be easily version controlled. Also, it's relatively straightforward to automate the use of these tools in order to generate diagrams and documentation during the build process.

In essence these are domain-specific languages (DSLs) to describe diagrams, which therefore provide some rules and a degree of structure as to what can be included on each diagram that is generated. However, the underlying model cannot be queried and the textual diagram definitions aren't connected to the code, unless you build some tooling to automatically generate it.

Text-based tooling is quick and easy to use, but it still doesn't create a real model of the code that can be queried.

The goal of Structurizr is to allow software developers to easily create software architecture diagrams that reflect the code. Structurizr combines the power and richness of a model, with the ease of use we get from text-based tools such as PlantUML and WebSequenceDiagrams. Our team-based pricing ensures that everybody on your team has access to diagrams, documentation and explorations when they need it.

Structurizr is a collection of tooling to visualise, document and explore your software architecture.